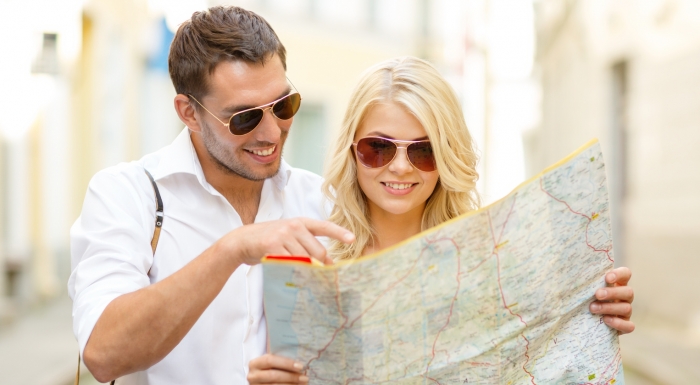 You can travel in Poland both by land and air – our country is as fascinating from above as it is on the ground. Modern means of transport create many interesting and cheap opportunities for tourist visiting Poland. It is worth looking into some of the offers and leaving your car in a garage to enjoy sightseeing on your own.

The sky above the Vistula is cut through by flight paths occupied by the most popular European airlines. A cheap connection to Poland is available for example by WizzAir, RyanAir, Norwegian, AirBerlin, EasyJet, Germanwings and EuroLot, a Polish airline. All you have to do is simply spend a short while with a popular flight search engine, a quick flight and a fast checkout at one of the Polish airports – apart from the Warsaw Chopin Airport, they can be found in Katowice, Krakówk, Wrocław, Poznań and Gdańsk. What is more, Poland has its own airline, LOT, and operates planes of the largest European companies (such as Lufthansa, AirFrane, BritishAirways or SAS). Domestic flights are an interesting option because the quality of Polish roads is not satisfying and often it is more convenient to simply fly above them.

If you have some time to spare and want to admire Polish landscapes through the window, using relatively cheap Polskie Koleje Państwowe, abbreviated to PKP(Polish State Railways) is a good idea. Although traction thickens in the western part of the country, transport companies are unreliable at times and the quality of trains leaves a bit to be desired, PKP offers an efficient and safe transport between cities – with decent Eastern European standards. Schedules, information about ticket prices, discounts and special offers can be found here: www.pkp.pl. The website is constantly updated, mobile applications and an English version are available. The Polish railways has been evolving all the time – stations have been renovated slowly but successively. When travelling by train, you can observe how the country and its residence have been changing.

Domestic bus trips can be an alternative for PKP. Every big city has an office of Przedsiębiorstwo Komunikacji Samochodowej (Motor Transport Company) and offers regular rides between cities. Unfortunately, looking for a connection on the Internet can be difficult, especially for a foreign tourist – you have to know the Polish topography to choose the right company and set the search parameters. Still, if you go to the bus station in a given city (always in the centre), you will quickly learn about PKS routes and tickets. Apart from local and privatised PKS, Poland also has cheap private carriers. Most of them operates mainly regionally and their offers can be found in tourist agencies and on bus stations. The most popular one is PolskiBus (www.polskibus.pl) – it offers very cheap long-distance connections and good quality of its vehicles. The company is relatively young that is why it operates only in some of the largest Polish cities. Still, everything suggests that the number of such carriers will increase, which is good news for tourists.

Using a large network of public transport is a good idea when visiting Warsaw – buses, trams, numerous taxis, the underground and even city bikes give unlimited opportunities to move in the capital. Such transport is not only quick and cheap but also enables people to sightsee freely.

Definitely the cheapest option is offered by the local Zarząd Transportu Miejskiego (Public Transport Authority). You can choose from short-term, single fare (zones are applied) and long-term (1-day, weekend) tickets. ZTM offers numerous discounts, for students and groups, among others. A modern system of urban bikes VETURILO is also at your disposal – for a small fare you can use a rented bike and travel across special stations. Prices and current schedule of buses, trams and the underground can be found online: www.ztm.waw.pl. You can learn there about any changes, difficulties, road works and the discount system. The website is available in three foreign languages (English, Russian and German) and partially in the sign language. There is also a mobile application where everything is constantly updated.

If you rather move in a more comfortable and completely independent way, you should use one of the taxi corporations. The best idea is to choose one with the coat of arms of the city – there is a lot of them and they offer standard prices. Miejskie Przedsiębiorstwo Taksówkowe is an example, but there are also many others, including private companies.

Regardless of the chosen mean of transport, the website www.warszawa.jakdojade.pl is really helpful. All you have to do is simply enter your starting point and destination, the system will generate several options and provide information such as price, time of travel and other preferences. The website is available in English and on mobiles.