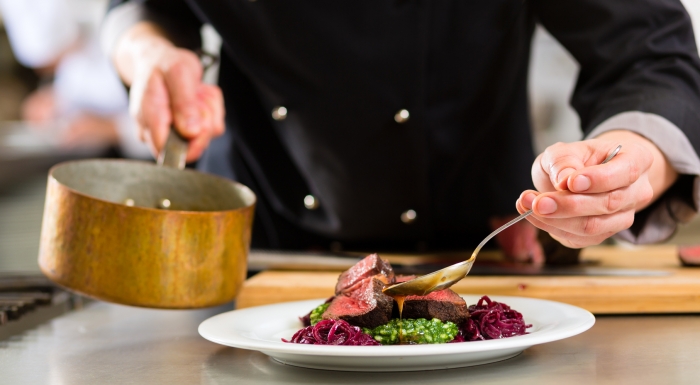 Although Polish cuisine is not as popular in the world as for instance the Italian food, many gourmets appreciate its originality and peculiarity. Still, it is hard to pick places which offer the best flavours without proper knowledge. The following list of top ten restaurants in Poland can help you choose.

The top of the list is taken by Atelier Amaro from Warsaw, which is the only Polish restaurant to be awarded with the Michelin Rising Star, the most prestigious culinary guide in the world. It offers its customers delicious Polish cuisine in a modern version, which creates new, rare flavours.

Kraków can also boast of one the most valued restaurants by Michelin in Poland. The hotel restaurant Copernicus was awarded with three cutlery symbols. It was also Polish Noble Prize winners’ favourite place ‒ Czesław Miłosz and Wisława Szymborska. The restaurant is located inside the gothic walls of the hotel and is one of the most exclusive places of this kind in Poland. The local cuisine is a true feast for the palate.

Back to the capital again where the Pod Gigantami restaurant, the third in our ranking, can be found. Its warm and family atmosphere attracts guests who will surely feel like home here. Pod Gigantami is the name of the one of the best preserved tenement houses in the centre of Warsaw, where the restaurant is situated. Part of its decor can be credited to Antoni Strzałecki, a Polish painter.

Kazimierz, a district in Kraków, is full of restaurants but only few of them deserve to be described as sophisticated. Studio Qulinarne is a place where ingredients, which on the surface seem to be impossible to combine, provide dishes with unique flavour and character. The menu changes along with seasons which guarantees fresh and high-quality dishes.

Wentzl  (Kraków) is a restaurant from the end of the 17th century whose former glory was restored. It offers the best traditional Polish cuisine. The restaurant can brag about a wonderful interior decor which creates an excellent whole along with the dishes.

In Warsaw, there is no place which is more charming than the Royal Łazienki. That is the place where another restaurant included in our list can be found. “Belvedere” comes up with world class level expectations. This amazing and original place creates a unique atmosphere that goes perfectly with the served food of the highest level.

A beautiful appearance motivates our senses and imagination to work harder. “Sąsiedzi”, a restaurant in Kraków, will surely guarantee you such experiences. Charming and mysterious cellars attract fans of atmospheric interiors, while a winter garden invites for a nice lunch meeting. Outstanding dishes impress even the biggest gourmets.

Karol Okrasa (famous for TV programmes) is the chef in Platter restaurant in Warsaw. His dishes are a real treat, not only for the palate but also for the eyes. The restaurant relies mainly on nice memories. Dishes served here will remind you of flavours of your childhood.

In Stary Hotel, which can be found in Kraków, another restaurant from our list is located. Trzy Rybki is a great place for fans of Polish cuisine. Its menu depends on season and available, fresh ingredients. A modern way of serving traditional Polish delicacies turns out to be a brilliant idea, also according to guests.

The Polish Business Roundtable Club can boast of one of the best Polish restaurants, located in its seat. Amber Room, situated in the Sobańscy palace, specialises in modern version of Polish cuisine and follows the latest trends. Beautiful surroundings make this place even more prestigious.

As you can see, the list of the most valued Polish restaurants in the world concentrates around Kraków and Warszawa. It does not mean that there is a lack of good restaurants in other cities. Still, it is worth starting from those which offer service and flavours of the highest level.