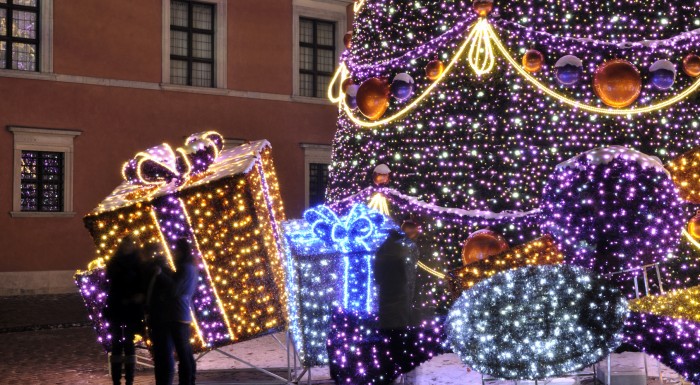 Christmas is an exceptional time when we slow down a little to focus on family and friends. Still, we are not the only ones that feel this magical atmosphere – every big city can sense it, too. As every year, Warsaw becomes more and more beautiful from the very first days of winter.

The most important sign that Christmas is coming has been turning on the Christmas Illumination in Warsaw. This year, it is going to take place on Saturday, 5 December. Many fairy tale characters as well as Santa accompanied by elves are going to appear on this event. Everyone who wants to participate in joint lighting of the biggest Christmas tree in the city and to see the Royal Route as well as many other streets lit by thousands of lights should come to Plac Zamkowy at 5:00 p.m. on that day.

Also those who decide to spend some time in the Old Town and its vicinity will experience the Christmas atmosphere. Numerous stalls and church cribs will provide the visitors with Christmas ambience. Is there a better association with Christmas than mulled wine, regional dishes, Christmas tree decorations and gifts?

Also theatres in the capital will not let you down this Christmas. Teatr Rampa invites everyone to an atmospheric play – “A my do Betlejem...”, whereas Palladium stages, like every year, “The Nutcracker” – and the Gala Christmas Concert. Torwar organises spectacular ice shows – “Peter Pan”, “Cinderella” and “Disney on Ice”. What is more, the famous Moscow City Ballet is going to stage “The Swan Lake”. As far as people who love Christmas carols are concerned, they should go to the Warsaw Philharmonic, where everyone, regardless of age, are invited for carolling together.

Those who decided to stay fit and active despite the coldest time of the year can count on numerous runs organised around 6 December. The 10-kilometre Santa Run is going to be held in Kabaty Woods. The same distance will have to be covered by the participants of the 20th Żoliborz Santa Run and the Santa Run in Służewiec.

“Zimowy Narodowy” is an annual campaign consisting of numerous attractions available at the National Stadium. The Christmas Town will be erected for the third time on the field of the PGE National Stadium. Three ice rinks, an eisstock court (an Austrian version of curling) and an amazing ice hill – everything on over 5,000 m2 of ice. Those who enjoy activities not particularly related to winter can visit the largest roofed skatepark in Warsaw. Moreover, the best in the world at figure skating are going to show their skills during a special event. The youngest participants will have a chance to practice skating or rollerblading. Last year, over 500,000 people attended “Zimowy Narodowy”, considering this year’s attraction, we expect a similar number of visitors.

People who love giving unusual gifts should visit the Soho Factory on 12-13 December, when the Slow Weekend, an event with 300 carefully selected exhibitors showing their ideas for Christmas gifts, is going to be held.

Skating enthusiasts will have a chance to visit numerous ice rinks in Warsaw – apart from the PGE National Stadium, ice rinks can be found at Torwar, by the Palace of Culture and Science as well as at numerous Sports and Leisure Centres in the whole capital.

Christmas is also a special time for restaurateurs. Aromatic borscht, delicious carp – is there anyone who does not love those dishes? Enthusiasts of traditional Polish cuisine should visit such restaurants as Dom Polski and Oberża pod Czerwonym Wieprzem. If you fancy more exotic delicacies, make sure to come by to Focaccia Ristorante, french Żurawina or Bollywood, which specialises in Indian cuisine. If you care about extraordinary food but also about palatable alcohol, you need to check out Hoża, a place known for Argentinean dishes and excellent wine, extremly climatic Bierhalle or cult Dom Wódki.

To arrange the best Christmas walk in illuminated Warsaw, we recommend using our Event Calendar. Apart from the attractions mentioned above, it contains a lot of other interesting events.