Media chefs and their restaurants in Warsaw 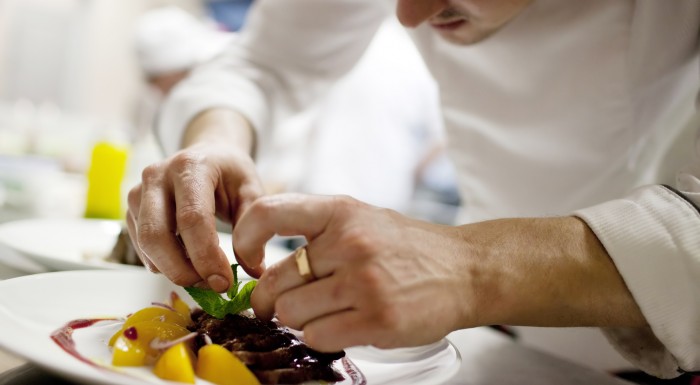 Culinary shows are one of the regular elements of television programming. Still, cooking is not enough for the viewers any more. It is important that a chef is a go-getting media person who has this something about him- or herself. Poland is not an exception in this case. Let us take a closer look at the chefs who can be seen on Polish TV.

This is an extremely energetic and temperamental person. She is not also a restaurateur but also an expert on great style and taste. Miss Gessler became famous for an amazing show – Kuchenne Rewolucje – which helps badly prospering restaurants to get back on their feet. She changes their menus, design and atmosphere to create places that are gladly visited by customers. What is more, she has just become a judge in the Polish edition of Master Chef. The show looks for culinary talents among amateurs. She has written two culinary books and been a frequent columnist in Wprost and Polityka. Magda Gessler is an owner of several fantastic restaurants in Warsaw. Some of them are: AleGloria (3 Michelin cutlery symbols), U Fukiera, Biała Gęś, Bellini, Dom restauracyjny Krokodyl, Bistro Masz Gulasz, Polka, Gar Ristorante, Cukiernia i Delikatesy Embassy, Słodki Słony and Zielnik Cafe. Her restaurants are dominated by Polish cuisine and regional products which are carefully selected. Her dishes taste like “mum’s” with some southern panache and freshness.

Another judge from Master Chef. He is a very friendly and knowledgeable person. Moran was born and brought up in France, he gained experience in Paris, Switzerland, Luxembourg and Germany. He won Poles’ heart thanks to funny linguistic mistakes and an amazing restaurant – Bistro de Paris. It is a piece of Paris in Warsaw – wonderful dishes of French cuisine are served there. The place is even more prestigious due to a recommendation in the international Michelin culinary guide. Michel Moran has also written a book – Moje Smaki – in which he has shared recipes for his favourite dishes.

He is famous for a culinary reality show – Top Chef (for professional cooks) and for a quite recent programme – Hell’s kitchen – Piekielna Kuchnia in which he turned out to be a very demanding and strict chef. The winner of the show can work in Atelier Amaro, a very prestigious restaurant in Warsaw, which is the first one in Poland to be awarded with a Rising Star in the Michelin guide. The menu in Atelier Amaro mainly consists of fresh regional products which are used to prepare high-quality dishes. Wojciech Modest Amaro learned his trade by world-class cooks, such as Alain Ducasse, Yannick Alléno, Ferran Adrià and Gordon Ramsay. He is an author of two culinary books (for one of them he was awarded with Grand Prix de Litterature Gastronomique) and received Chef d’Avenir title.

He is a regular guest in cooking TV shows (Dzień dobry TVN, Pytanie na śniadanie). Robert Sowa has been teaching Poles how to cook and telling about his favourite flavours for years. He says that his cuisine is sometimes crazy, but guests love it. Sowa is also a columnist, an author of 12 culinary books and a member of elite culinary clubs and societies. Currently, he owns 2 restaurants in Warsaw: Sowa i Przyjaciele, which serves both international and Polish cuisine, and Meta Disco, a place where you can try some fantastic dishes and feel the atmosphere of the old times.

Another chef who runs his own culinary TV show. He is associated mainly with Pascal po prostu gotuj in which he taught Poles how to prepare some amazing dishes. His passion for cooking began when he was a child. He practiced in France and New York, among others. Brodnicki travelled around the world and discovered new flavours. He specialises in French cuisine for which he was awarded with a prize, Le trophée de l‘esprit alimentaire, in 2008 for its promotion. He has written 5 culinary books and has not stopped teaching how to cook.

He is a chef, an author of a culinary book and a host of culinary TV shows. We mainly associate him with Kuchni z Okrasą, Okrasa łamie przepisy and a fantastic series − Smaki czasu z Okrasą – in which he invites famous guests and asks them about their culinary preferences and memories. He loves Polish cuisine, but his passion for food tells him to look for new flavours. He has written Gotuj z Okrasą, which contains recipes for dishes presented in his shows. Currently, he owns a restaurant, Platter, where dishes are treated as small masterpieces. This is Polish cuisine in a new version.

His motto goes in English: best products, simple recipes and fantastic flavour. He has been appearing in the culinary part of Dzień dobry TVN in which he and his guest have been preparing fantastic and surprising dishes. He has written a book with his best recipes − Kuchnia Polana w obiektywie Wellmana. He had worked in kitchens of the best Polish hotels. Now, he is the chef of a restaurant in Warsaw – Soul Kitchen (winner of the best restaurant 2012 award). Andrzej Polan is inspired by flavours of Polish cuisine and prepares fantastic dishes which bring back childhood memories.