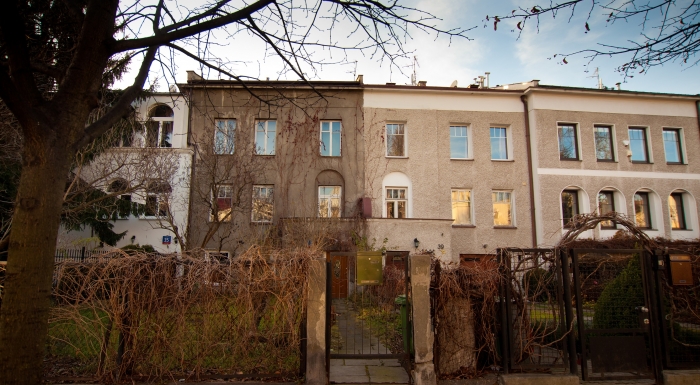 Saska Kępa is a neighbourhood in Praga Południe. The word ‘Kępa’ [holm] is related to its location, right next to the Vistula. For many years, the name of the neighbourhood had been changed until king Augustus III found this place really enjoyable when it comes to relaxation. Due to this fact, the adjective ‘Saska’ [Saxon] was introduced. It has been functioning up to this day.

Originally, it was mainly a relaxation place, a suburban oasis of calm. At the beginning of the 20th century, Poniatowski bridge which joint the neighbourhood with the city centre was built. In 1930, the number of urbanization processes started increasing. Saska Kępa has been said to be a prestigious place to live since that year. After the World Wars, numerous districts designed by outstanding Polish urban architects were built. They create a contemporary image of the neighbourhood.

Saska Kępa is an attractive residential area. Surrounded by the magnificent Skaryszewski Park, allotments, and a green bank of the Vistula with rows of trees along the streets, it creates a green ‘haven’. Many artists, writers, architects, composers, military men and other known personalities live there. The architecture of the neighbourhood is extremely valuable. You can find there many modernistic buildings. Most residences were built during the interwar period and in the 50’s and the 70’s. Some traces of war-time bullets are still visible. In the following years, tenement houses and even modern apartment buildings have been erected. Many embassies have their registered offices there.

If you take a walk in Saska Kępa, you can come across numerous sculptures of many outstanding Polish artists, for example Stefan Żeromski, a publicist, Bolesław Prus, Adam Mickiewicz, both writers, or Agnieszka Osiecka, a poet who actually lived there. She is depicted sitting at a round café table (in Francuska street). Take a closer look at the nearby villas and you will see plaques on facades and fences dedicated to other well-known residents.

Saska Kępa is also full of cafés and restaurants. Kępa Cafe in 12A Finlandzka street is one of the most atmospheric spots in the entire area. Its priorities are ecological meals (both vegan and vegetarian) and the so-called ‘fair-trade’. You can find there a wide range of books to read and a corner for children.