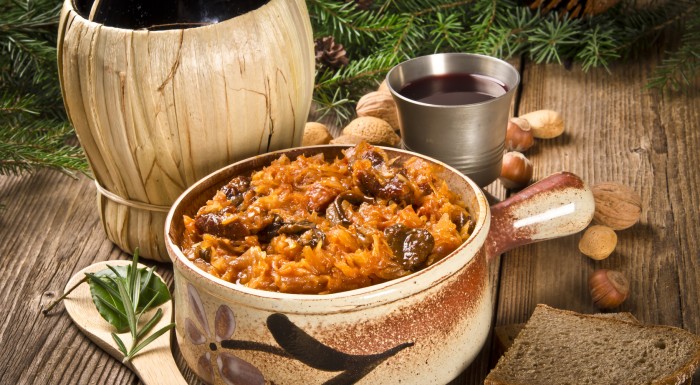 Polish cuisine is mainly based on native products flavours which have been known and used in Poland for many, many years. Some of them are typical only of Slavic nations and may seem weird for foreigners, especially from the West.

It should be said when defining its flavours that salty, sour, spicy, and sour-spicy dishes dominate. Hot dishes are rather rare because hotter flavours are usually neutralised.

Flour dishes are the base of Polish cuisine – pierogi, noodles, dumplings, bread. In the past, kasha was commonly used, nowadays it has been replaced by potatoes – an integral element of every dinner meat dish. As far as meat is concerned, Poles has been fond of pork and poultry for ages. That was caused by economic and culinary reasons. Beef was not often served on Polish tables because cows were raised for milk which was used to make cream, cottage cheese, cheese and butter. Such preferences has remained up to these days. Soups based on meat stocks, various vegetables and wild plants (sorrel, chards) are often cooked. Typical Polish soups are: broth (almost a compulsory dish on a Sunday dinner), beetroot soup, traditional żur, pea soup, cabbage soup, cucumber soup, mushroom soup, tomato soup and sorrel soup. Also cold beetroot soup can be included in this group – it is a delicious and refreshing soup, served cold and based on sour milk or cream (also often used in Polish cuisine) and vegetables.

Fruit unknown in the West such as sweet cherries, gooseberry and currants are very popular. Fruit are used in desserts, jams, povidel, to neutralise sour dishes and cooking compotes – fruit beverages. Another popular beverage made of fruit is delicious fruit liquor. Tea – with sugar and lemon – as well as coffee are also drunk.

Nowadays, Polish cuisine is diverse in terms of geography. Different regions offer different things. In Pomerania, due to the access to the sea, sea fish are eaten, whereas cheese made of goat milk – oscypek – a tourist attraction is very popular. Dishes differ from each other in the choice of spices and some ingredients, however, there are those which are known and eagerly eaten in the whole country.

Tourists’ opinion that souring food is a weird habit of Slavic cuisine is commonly known. Still, the fact that one of the most typical Polish dishes are bigos (dish made of cabbage and meat), pickles and sauerkrauts must be mentioned. Another popular course in Poland is flaki (not so popular among visitors) – it is a soup made of cut gizzards. Despite the fact that it does not sound encouraging, it is worth trying unusual Polish specialities. They may surprise you with amazing flavour!