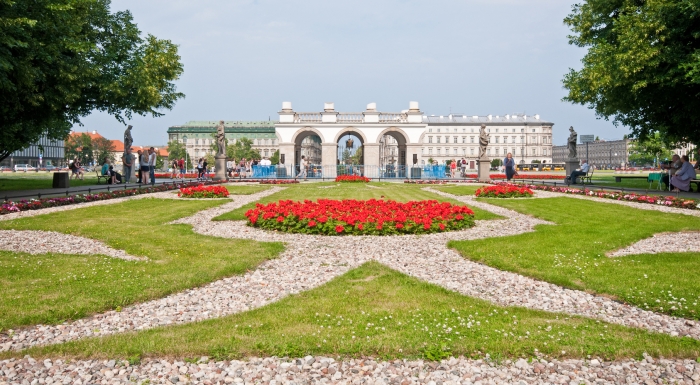 The Saxon Garden in Warsaw is located in Śródmieście and is undoubtedly a place which is worth visiting for its history. The possibility to relax here and escape from the hustle and bustle of the city is surely an additional asset. It is one of the oldest parks in our country. It was opened to the public in 1727. Nowadays, it covers 15.5 ha. Originally, it was a palace garden which surrounded the Saxon palace.

The park was established at the turn of the 17th and the 18th century. King August II the Strong is said to be its originator. During his times, the park gained much importance as a palace garden, designed according to French baroque style. After 1735, many facilities were erected in it, including: the Great Salon, the Small Salon as well as Operalnia [an opera house]. Right there, on king Stanisław August Poniatowski initiative, the first play in Polish, “Natręci”, directed by Józef Bielawski, was staged in 1765. This moment is said to be the beginning of the National Theatre. In memory of this event, a commemorating stone was placed by the crossroad of Marszałkowska and Królewska streets. After king August departure, the Saxon Garden was neglected which led to demolition of Operalnia in 1772. The garden was completely vandalised after the collapse of the Kościuszko Uprising. Some of the sculptures were transported to Russia, mainly to Petersburg. The reconstruction works of the garden began no sooner than in 1797. It was rebuilt and turned into a typical English garden. It was designed by James Savage. Actually, he became famous for this work. A wall was replaced by a fence and the Great Salon was eliminated (it did not match the modern style).

After the November Uprising, the Saxon Garden was significantly vandalised once more, however, thanks to Michał Szubert actions it could be restored to its former glory. Enriching the garden with a reservoir and a fountain in the 19th century was a really important moment. The garden was taken over by the Germans during the Second World War, Poles were not allowed in it after 1942. It was also controlled by the occupier during the Warsaw Uprising. Back then, majority of stand was destroyed.

In 2007, the Saxon Garden was revalorised. It is worth mentioning that nowadays, despite war destruction, the park has lots of old, sometimes even over 200-year-old, trees, including three natural monuments. The garden was partially reconstructed in 2012. Its current area covers 15.76 ha.

The most important structures are: the Great Fountain, baroque sculptures depicting muses and virtues, a marble sundial, the Blue Palace and the Tomb of the Unknown Soldier. In the Saxon Garden, you also have a chance to see the monument of Maria Konopnicka and a memorial stone, which was placed there in honour of the 200th anniversary of opening the place to the public. What is more, two plaques, one immortalises the local residents fallen during the Second World War, the other one commemorates welcoming the Polish army by Józef Piłsudski, can be found.