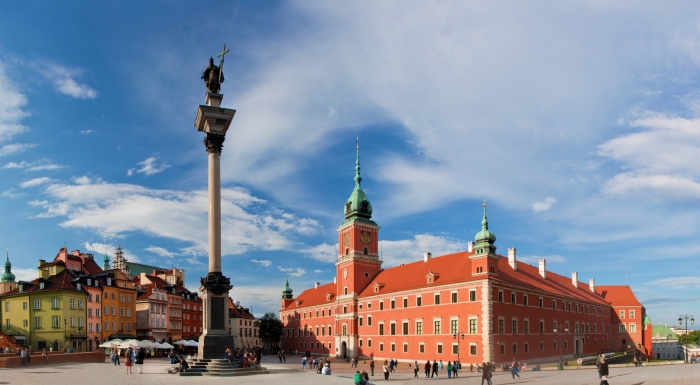 The Royal Castle in Warsaw is a baroque and classicistic building located in Castle Square. Originally, it was a residence belonging to Dukes of Mazovia. It became authorities of the first Republic of Poland’s place of residence in the 16th century. Another change took place in the 19th century due to the collapse of the November Uprising. Russian authorities moved to the Royal Castle back then. The German Governor-General resided here during the First World War. In 1920-1922, it was Chief of State’s place of residence, whereas, in 1926-1939 the President of the Republic of Poland officiated here. The Royal Castle was plundered and burnt down by the Germans in 1939. In 1944, it was completely destroyed. Fortunately, it was restored and rebuilt after 1971.

Currently, the Royal Castle is a cultural and historical monument which also functions as a museum and fulfils a representative role. It is worth mentioning that it was included in the National Register of Museums. What is more, it joined the UNESCO World Heritage List along with the Old Town.

A broad renovation of the Copper-Roof Palace, which has been a part of the castle complex since 1999, took place in 2004-2008. In 1996-2009, repair works of Kubicki Arcades, that was a connective passage way of the lower and medium Royal Gardens, were conducted. The original colours of the eastern Saxon facade were restored in 2009 thanks to conservator’s decision.

Nowadays, the Royal Castle in Warsaw is directly subordinate to the Ministry of Culture and National Heritage because of functioning as a museum. What is more, national meetings as well as various official visits are held here. It should be mentioned that annually the Royal Castle is visited by approximately 500,000 people.

King Stanisław August Poniatowski insignia remain in the Little Chapel. Moreover, an urn with Tadeusz Kościuszko heart is located there. Also the president of the Republic of Poland’s insignia are kept in the Royal Castle.

A normal ticket costs 22 zlotys, a discount one is 7 zlotys cheaper. There is also a family ticket (14 zlotys). Children and teenagers under 16 can visit the castle for 1 zloty. You can also buy guided tours in Polish or foreign language. They cost 90 and 110 zlotys respectively.