Palace Of Culture And Science 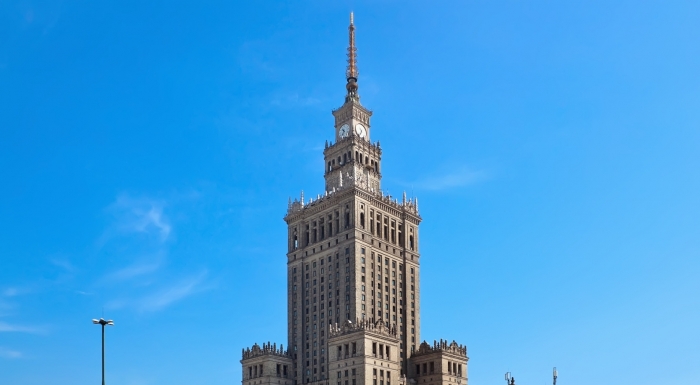 The Palace of Culture and Science is a place worth visiting mainly because of the fact that it is some kind of a signature of the capital. It was erected in 1955 in as a gift from the soviet nation to Polish people. The idea for the building originated from Joseph Stalin.

The Palace of Culture and Science was built of materials such as bricks, steel, ceramics, concrete, stones and wood. The construction of the building was based on a combination of socialist realism, art deco and Polish historicism. It is worth mentioning that its architects, these are Lew Rudniew and his team, paid attention to every single detail. Interestingly, in the 50’s many buildings similar to the Palace of Culture and Science were erected both in USSR and the satellite countries. Such buildings can be found in Riga, Bucharest (one in each) or Moscow (eight).

According to initial plans, the building was to be 120 metres high. Eventually, the height was set to 237 metres. This number includes the antenna spire, which is an integral element. The palace has 44 stories which makes it the highest building in Poland. On the 30th floor, you can find a view terrace, which is located at a height of 114 metres. It is opened to tourists every day, from 9:00 a.m. to 6:00 p.m. A normal ticket costs 18 zlotys, a discount one is 6 zlotys cheaper. If you want to enter it in a group consisting of at least 10 people, you will have to pay 10 zlotys each. Protective bars were installed due to numerous suicides in the 50’s. You will see a breathtaking panorama of Warsaw from the 30th storey which also contains an indoor gallery and the Gothic hall. The last one is the highest hall, whose signature element is a star vault adorned with four rosettes. Thanks to technical equipment, on the 30th storey various banquets, conferences and promotional events can be organised. The whole building contains 3288 rooms.

In 2000, an enormous clock was installed on the top of the building. It is the second largest clock in Europe. That is not all, it is said to be the highest located tower clock in the whole world. Its four faces are 6 metres in diameter. Nowadays, the Palace of Culture and Science contains many different companies and institutions, including the Polish Academy of Science. What is more, you will find in it two famous concert halls: the Congress Hall and the Concert Hall. The first one seats 2880 people, the other one has enough room for 550. The palace also has a cinema, theatres, museums, a library and a post office.

The Palace of Culture and Science in Warsaw was officially included in the register of monuments in 2007.