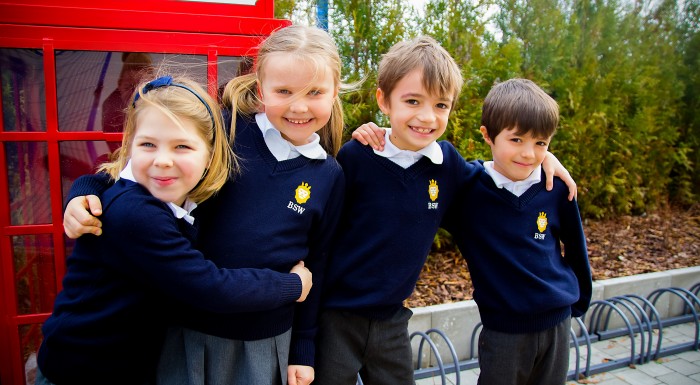 Nowadays, more and more parents decide to send their children to international schools where classes are held in English, while syllabuses and teaching methods are based on West European or American models. For several years, the number of such facilities has been consistently growing. How to find the best one?

Particularly notable is the British Primary School of Wilanów. This primary school located, as the name suggests, in Wilanów in Warsaw aims at educating the youngest students according to British standards. Classes are held in English (apart, of course, from Polish and other foreign languages lessons), while the school operates under the supervision of the Independent School Inspectorate, which is subordinate to the British Superintended for Schools. Why the British system? The history of formal education there is almost 1,500 years old, whereas the British education system has trained over 100 Nobel prize winners. Apart from solid education, British teachers focus on developing independence and creativity among their students. According to the founders of the schools, these features are the most essential for children and teenagers.

When it comes to language schools in Warsaw, THE BRITISH SCHOOL Warsaw is undoubtedly one of the leaders. Teaching in accordance with the requirements of the British educational programme, the facility was established in 1992 in cooperation with Nord Anglia Education International. Teaching for over 20 years, the school has trained over 900 students from approximately 60 different countries. It can be attended by children who are at least 2.5 years old. Annually, IB exam and International General Certificate of Secondary Education results of THE BRITISH SCHOOL Warsaw students exceed the global average score. Graduates of the school successfully pursue further education at prestigious universities such as University of Oxford, University of Cambridge, London School of Economics, University College London, New York University and Princeton University.

The capital of Poland has many places for those who favour Maria Montessori’s teaching methods. The Italian precursor of modern approach towards education believed that each child was different and there was no universal educational plan for all little ones. Her philosophy was based on love, tolerance and humanitarianism, while in her opinion fun and gaining individual experience were the most important for children. Warsaw Montessori School consists of:

Functioning in compliance with doctor Montessori’s main motto, i.e. “Help me do it by myself”, the facilities provide students with excellent conditions for comprehensive physical, cultural and social development. The Warsaw Montessori School complex constantly supports its students in every aspect of life and encourages them to discover and develop individual personality features.

The beginnings of the American School of Warsaw date back to 1953. In 1987, the school received accreditation from the European Council of International Schools and New England Association of Schools and Colleges. Thanks to the expansion of its seat in 2012, it is the only facility in Poland whose building complies with the LEED certification. Classes consist of no more than 20 people, and students come from over 50 different countries. Foreigners are the vast majority. An integral part of the American education system is sport, to which the authorities of the American School of Warsaw pay a lot of attention.

International schools are a fantastic solution for parents who often move and want their children to receive constant education of high quality. It also a great option for parents who want to provide their children with international education. Students of such school must put a greater effort than their peers attending Polish schools, but the time they spend at school is rich in numerous attractions. Among Polish cities, Warsaw gathers the best international schools, and parents are aware of the fact that it is a great investment for the future of their children.