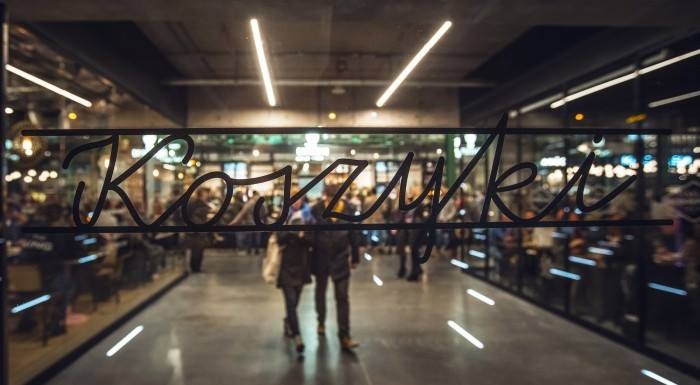 Madrid can brag about Mercado de San Miguel, London – Borough Market, New York– Chelsea Market, whereas Warsaw – Koszyki.After undergoing a thorough renovation, this over one hundred year old building is once more one of the most interesting and popular places in Warsaw teeming with life.

It owes its name to Stanisław Lubomirski – the Grand Marshal of the Crown who decided to isolate Warsaw with entrenchments reinforced with wicker baskets [basket in Polish is koszyk].  It was designed in a secessionist style by the main architect of Warsaw in reborn Poland – Juliusz Dzierżanowski. Decorated forged gates and sculptures created by Józef Zygmunt Otto were made in H. Zieliński’s factory. Some of them have been preserved until today, including the head of a bull and the mermaid on an attic.

Built in 1906-1908, the Koszyki Market Hall served as a marketplace right from the start. Constituting an integral part of the city almost throughout the entire 20th century, it was a popular meeting place among all citizens of the capital.

Commonly known as the ‘People’s bazaar’, Koszyki where the place to shop or visit the hairdresser. It was visited by elegant ladies, local artists as well as shady crooks. It was the place to be for everyone and the beating heart of the district.  No wonder that many citizens of Warsaw considered Koszyki the symbol of the city. The hall changed along with the city – in the times of the Polish People’s Republic it was turned into a modernist supermarket and became economically independent in 1990.

After a temporary loss of its glory, Koszyki Hall, inspired by European market and restaurant halls, has returned with style. Its new intriguing character was revealed in autumn 2016 after a thorough renovation.

Today, the Hall represents historical heritage entangled in modern urban web. The fact that tradition combines with modernity is confirmed by its logo itself. It was inspired by the original neon from the 60s. The word “koszyki” was placed between two lines in order to refer to the historical function of the structure. In the past, when people went shopping they prepared a list beforehand
in a classic notebook.

The Hall is a place where the culinary world seamlessly combines with the world of culture, dominated by the idea of slow food, and where not only all products but also the atmosphere and relationship with customers matter. You will find here numerous shops, service points and restaurants offering flavours from all over the world. You can always count on exotic breakfast, delicious lunch or a glass of exquisite wine. In Koszyki, you can come across crowds at any hour.

The central meeting point is Bar Koszyki, which serves fantastic drinks, cocktails and strong alcoholic beverages. Its offer includes plum moonshine and Piwo Koszyki, beer brewed in Warsaw and sold only in the Hall. If you prefer healthier drinks, you should check out the point serving unique juices made based on an individual basis. Drinking such juice will surely restore the right amount of antioxidants in the body.

Those looking for culinary attractions should check out the hottest sauce in Warsaw, whereas people preferring something less extreme will surely enjoy a Mediterranean dinner and genuine Indian food. We also recommend visiting sushi masters, trying sausages from villages of Lesser Poland and plum in chocolate flavoured ice cream.  What is more, you will find here the best hummus in Warsaw,
seafood supplied directly from a farm, pasta made from ingredients of the highest quality, groats, braird, sprouts, edible flowers and grass ... and even burgers served as true culinary masterpieces.Sounds delicious? That is because it is delicious!

The Hall is full of temptations! Not only culinary temptations, just to make it clear. “The crucible of Warsaw” offers a wide range of attractions: wine and tea tasting, guided walks in the Hall, dermatological consultations, Q&A sessions with authors, scientific workshops for children and yoga classes.

Another aspect which makes the Hall unique is perfectly selected music. Outside the building you can hear classical music, while in shared sections – radio broadcasts and unique soundtrack consisting of nearly two thousand tracks of such genres as electronic music, club music, funk, soul, jazz, R&B, chill-out and world music.  Even more great music is guaranteed during musical weekends. Live concerts are organised in cooperation with Stanisław Trzciński.

What is more, the Hall promotes art, holds artistic events and welcomes cultural institutions. Free and creative artists, modernist brands and unique designs provide the Hall with a new meaning and allows it to cross commercial boundaries. It integrates, inspires and arises interest.

Koszyki has received numerous awards and distinctions, for example during the Property Design Awards 2017 in two categories: “design – interiors – shopping centres” and “block – shopping centre”. The awards were given to a place distinguished by excellent design and equipment of the highest level as well as by respect for its tradition and origins.