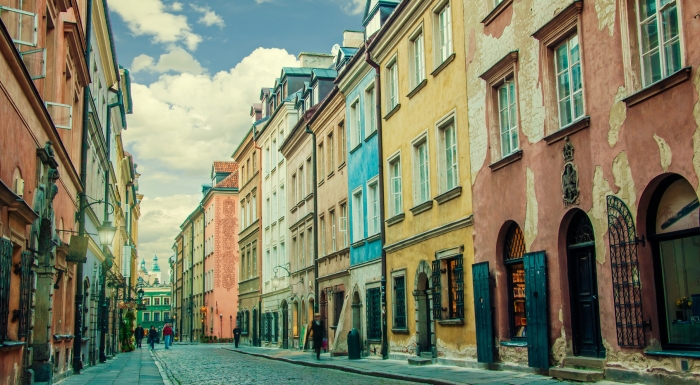 It does not matter if it is the middle of hot summer or the coldest winter days, cultural, tourist and business centre of Poland is teeming with life ‒ this is Warsaw. It attracts all year long. There is not a single tourist who would not find anything interesting, there is a little something for everyone.

The charming Royal Łazienki, equally beautiful at dawn and after dusk, takes its guests to a magical world whose beauty is revealed by glistening waves of water disturbed by snow-white swans, by colourful tails of distinguishingly walking peacocks and by the most important and impressive classicistic buildings which typify the essence of this period.

The beating heart of the capital, the Old Town, is a continuation of Warsaw romantic character. Residents of no other city love their place as much as Varsovians do. They defended the capital till the last breath. Many years of rebuilding Warsaw had unexpected effects. The Old Town flourished and was appreciated in the international arena. Distinctive thick walls, unusual order of buildings and other unique elements create an extraordinary and exceptional atmosphere.

Warsaw also prepared the Warsaw Rising Museum for its guests and residents. The most modern museum in the capital impresses with unique message of deep historical truth.

You should not finish in the Old Town. The most representative street of Warsaw ‒ the Royal Route ‒ begins by Castle Square. It leads through the most important historical parts of the city. First of all, Krakowskie Przemieście, with a large number of monuments and one of the heaviest guarded place in the whole country ‒ the Presidential Palace. It is the largest palace in the capital, whose trademark is the equestrian statue of Prince Józef Poniatowski. Next, you will see a countless number of monuments of Warsaw by passing Aleje Ujazdowskie and Nowy Świat.

Coming back to Polish leaders for a moment, king John III Sobieski, who is famous for the spectacular battle of Vienna, should be mentioned here. But even the strongest king has weaknesses. John III Sobieski is associated with his wife ‒ Marysieńska. The Wilanów Palace, impressing with its excellence, was built for her – it is really worth seeing.

To be in Warsaw and not to see the Royal Łazienki, the Old Town and Wilanów is like not seeing the capital at all. Still, everyone has their own preferences, the city is ready to entertain various people. Attractions of Warsaw does not include monuments only. You will find here a countless number of shopping, sports, science and business facilities. Złote Tarasy, the largest shopping centre in the whole city, enchants with its untamed, glass shape which gives the building a modern character and demonstrates its prestige.

Warsaw is a place where large cultural and professional business meetings are intermingled. Sport equals health and, despite the fact that the very centre of Warsaw lacks clean air, numerous parks as well as sunny squares provide people with an opportunity to take a break from the hustle and bustle.

If you like raking your brain instead, Copernicus Science Centre is your place. The large complex of buildings equipped with modern scientific stuff guarantees unforgettable experiences related to science, which takes here completely new characters.

When coming to Warsaw only on business, the capital opens a countless number of possibilities when it comes to choosing a conference hall. Every kind of event, from a small meeting, through a conference to a banquet for several thousand people, will be prepared here in the smallest detail and in every respect.

An old song about Warsaw goes in English like this: “Warsaw can be liked”. Anyone who had at least a single chance to walk down the streets of the capital will confirm these words. No matter why they came and what they saw ‒ they surely found something enchanting about Warsaw.