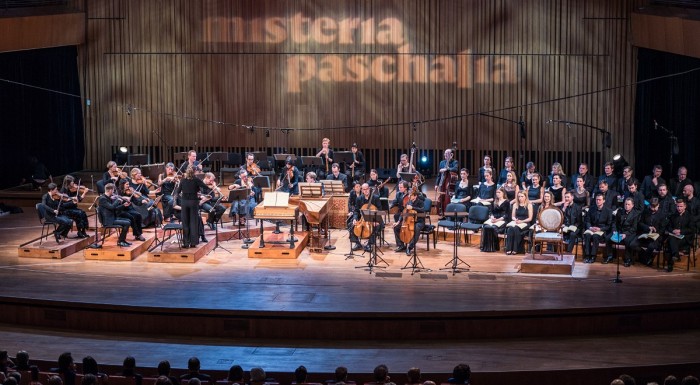 Misteria Paschalia 2019 consists of two passages – the first one is “Vanita”, a touching representation of Christ’s suffering and wait for his resurrection, and the other one is “Festa Napolitana”, i.e. joy.

On Holy Wednesday (17 April), Capella Cracoviensis will present a Polish and Italian repertoire. Their concert “In monteOliveti” will have a form of a musical theatre. It will include the music of Mikołaj Zieliński, Bartłomiej Pękiel and Asprilio Pacelli, a royal conductor. The concert will be held at 19:00 in the Church of St. Catherine of Alexandria (7 Augustiańska St.), which is known for great acoustic properties.

On Good Friday (19 April), the "Tristeserant Apostoli” concert will be held at the ICE Kraków Congress Centre. The programme of the evening is focused on the apostles’ pain and sorrow after the loss of their teacher as well as on the hope for resurrection. The concert is fully devoted to the forgotten works of Domenico Antonio Nola. The premiere of Nola’s pieces will be performed by the residents of this year’s Festival – Cappella Neapolitana and Antonio Florio – along with five outstanding soloists, including the Kraków-born soprano Anna Zawisza.

Lastly, Festa Napolitana will be held at 18:00 on Easter Monday (22 April) at the ICE Kraków Congress Centre. Neapolitan artists – the soprano Roberta Invernizz and the tenor Pino De Vittorio – along with the conductor of Capella Neapolitana – Antonio Florio – will show that they are the heirs of the comedy and musical tradition of Naples from the turn of the 17th and 18th century.

The tickets and passes are available for sale on the website of Kraków Festival Office in points of InfoKraków network and at eventim.pl.