Demontaż. Guitar closing down of Fabryka 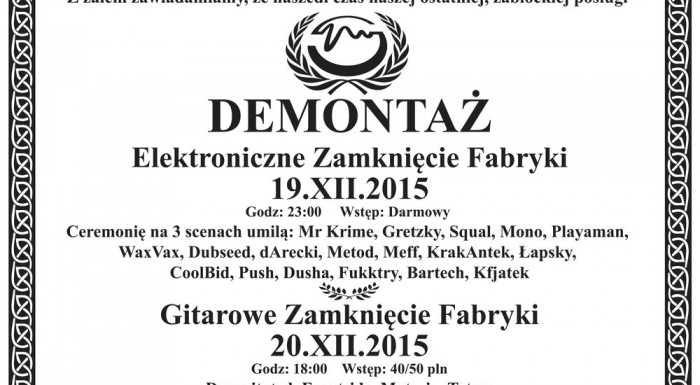 Fabryka, a club in Kraków, decided to close down with a bang, the event is going to be divided into two days. On the second one, 20 December, the club will say goodbye to metal fans. It will be the final concerts of tours of two bands – Decapitated and Frontside.

Decapitated is a Polish band playing technical death metal. They have given concerts in the whole world and participated in numerous festivals, including Metalmania, Metalfest, Hunter Fest or the famous Ozzefest. What is more, Metal Maniacs magazine described them as the hope of death metal.

Frontside come from Sosnowiec and play music which can be described as something between heavy metal with rock. Skilful combinations have won many fans of different genres over. In 2003, they received Fryderyk, a Polish award, for the album “I odpuść nam nasze winy”. Their latest record, “Sprawa jest osobista”, released in 2014, was a stylistic departure from metalcore towards hard rock.