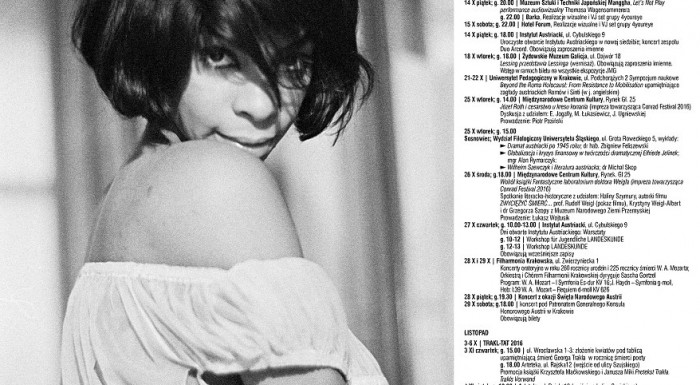 At the turn of October and November, the General Consulate of Austria in Kraków is organising the Days of Austria for the second time.

The goal of the event is to promote culture and art of this country.

​ Participants will have a chance to acquaint themselves with Austrian music, literature, art, photography and film.

Works of the outstanding photographer Erich Lessing will be shown in Kraków.

The exhibition will include political photo essays as well as works which have not been displayed before.

That is why, oratory concerts will be held in the Philharmonic in Cracow.

On 28 October, a concert to celebrate the National Austrian Holiday will take place, whereas one day later – a concert under the patronage of the honorary general consul of Austria in Kraków. Programme: W. A. Mozart – I Symphony Es-dur KV 16; J. Haydn – Symphon g-moll , Hob: I:39; W. A. Mozart – Requiem d-moll KV 626.

Moreover, a literary evening devoted to professor Rudolf Weigl as well as TRAKL-TAT – meeting with poetry and art inspired by the output of Georg Trakl will be held.

The full programme of the event is available here: www.konsulataustrii.com