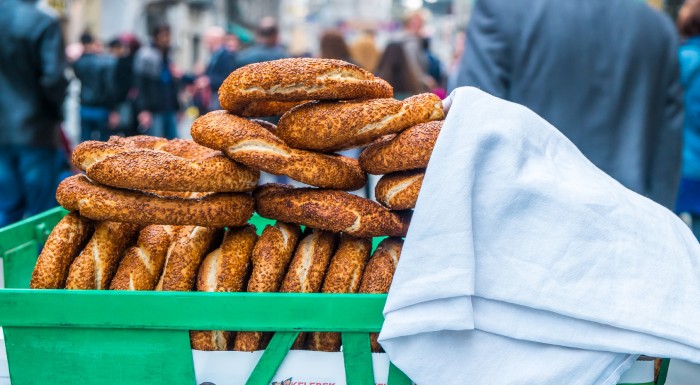 Streetfood, prepared food sold for immediate consumption, has been in for several years and flourished in Polish cities in recent times. Small kiosks and foodtrucks serve something more than just burgers and kebabs – among sold takeaways, we can find pancakes, Indian dishes, traditional dishes of Małopolska, as well as snacks from Quebec in Canada.

Burgertata is one of the first foodtrucks driving around Kraków. Currently, the chain includes two distinctive orange vans and stationary places. Delicious lunches are delivered to employees of the biggest office buildings in Kraków by the so-called office van. Its timetable and menu is available at the website of the initiative. The remaining two spots are permanent – a small place at 6 Krupniczna Street and Burgertata Garaż at 14 Prochowej, where you can order a burger and have it delivered.

Oriental cuisine enthusiasts from Kraków eagerly visit Sami Am Am (27 Świętego Wawrzyńca), a small place with Syrian cuisine available to eat in or to go. The place owes its popularity to genuine Eastern flavours of juicy meat and light home-made bread. Despite a streetfood atmosphere, the food is served here in a very aesthetic way. What is more, you can find here delicious desserts and traditional Syrian teas apart from dinner dishes.

Antler is the only place in Kraków where you can try a traditional Canadian snack – poutine – thick-cut fries topped with gravy sauce and cheddar cheese. Apart from this dish, the menu includes various burgers named like Canadian cities. There is also an offer for vegetarian customers.

Traditional cuisine enthusiasts will surely fancy Andrus Food Truck – the first foodtruck with typical Polish cuisine. You can order here the so-called maczanka, that is pickled neck, roasted in a low temperature and served with additions in home-made bread. You can pick them and sauces on your own. A vegetarian variation is also available. You can follow the information where the foodtruck can be found at a given moment on the fanpage of Andrus Food Truck.

Hindus is the first Indian street food in Kraków – a small van serving four various sauces with genuine Indian rice every day. Each dish has different spiciness, one of them is always a vegetable one. Prices of the dishes are really reasonable – a standard portion costs PLN 10, a large one is only PLN 13. The dishes are served in convenient boxes, which make it easy to eat on the go.